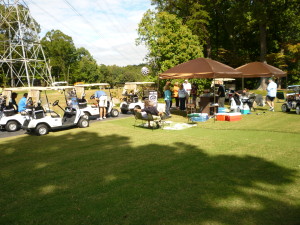 The Realtors of LKW Realty spent the day Thursday October the 10th at River Hills cookin up the food for the Chamber of Commerce’s annual Golf charity event. Quinn Johnson manned the Caribbean Grille featuring Filet Mignon and Shrimp Kabobs along with jerk Chicken. 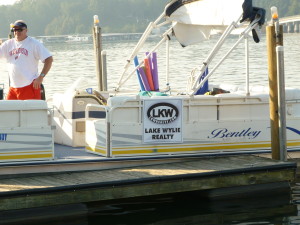 Waterfront Properties for sale have increased to 146 listings as of 9/15/13 further increasing supply of vacant undeveloped waterfront  lots. Demand for Waterfront Lots has decreased since the Great Recession started, primarily because of the lack Financing available.

Only 29 lots have sold on the Lake this year in Gaston, Mecklenburg and York Counties. The average sales price was $215,000, and days on the market were over 227.

Realistically the glory days in lots sales are over for now and the near future because of the lack of financing. Prices are declining back to the late 1990’s to early 2000 levels. Its a great Buyers Market for Waterfront Properties on the Lake. 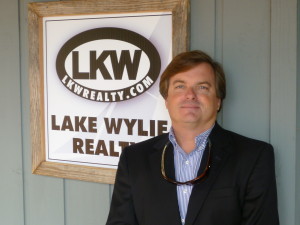 Quinn Johnson of River Hills has joined The Lake Wylie Realty Man Team as Broker Associate. Quinn has been a Licensed Broker in both Carolinas for more than a decade. His past experience includes Development, Commercial and Residential Sales. For the past seven years Quinn has specialized in sales and marketing of Homes and Home sites in “Lifestyle Communities”. Quinn and his Wife Kara live in River Hills and both grew up in Lake Wylie and are now raising three Children of their own in that same Community. Quinn can be reached at 704-906-6636 or email Quinn@lkwrealty.com

We are very pleased to announce Jerry Plageman has joined Lake Wylie Realty as Realtor/Associate. Jerry is a former Lake Wylie Man of the year and  is a 30 Resident of the River Hills area of Lake Wylie. Jerry is married to Phyllis and has two daughters Jenifer and Elizabeth. Jerry has been a Partner in the Shopps in the Landing and in Commercial Real Estate for over 10 years. and will be specializing in River Hills Real Estate along with Lake Wylie Waterfront Properties and Commercial Properties. Jerry can be reached at 704-293-5136 or email at jerry@lkwrealty.com

Labor Day has passed, but anyone expecting a slowdown on Lake Wylie may need to take a closer look. Several large events are planned at the lake during the next two months. Last week, USA Water Ski announced two major sponsors, Hall Marine Group and Race City Marine, for the Sept. 27-29 USA Wakeboard Nationals at Ebenezer Park in Rock Hill. Organizers expect 1,000 to 1,500 spectators. “It’ll be fun for spectators, even people who’ve never wakeboarded,” said Mark Murff with Hall Marine, a company whose oldest location and corporate office is Lake Wylie Marina. “It’s really amazing what these guys are doing behind a boat.”

The 15th annual national championship features a $15,000 purse for top pro men and women, featuring 11 divisions. Rock Hill/York County Convention & Visitors Bureau and the Carolina Show Ski Team are helping with the event. Auvis Cole, sports sales manager with visitors bureau, said his group uses Lake Wylie as a hook to land large events like the nationals. “Lake Wylie is such a great natural resource for the entire county,” he said. “Why not take advantage of such a great resource?” Cole’s group also is a sponsor for an Oct. 20 event bringing triathletes to Ebenezer. Lake Wylie Tri Fest, presented by  visityorkcounty.com, features short and long courses covering a swim, bike ride and run. Swimming takes place in the lake, up to 1,500 meters for the long course. The event is part of the Y Tri Series and is the ninth in a series of 10 races this year. It’s the third this year in Rock Hill, but a first using the lake. A Fort Mill event drew more than 70 athletes. Along with athletic events, fall is the time for two major gatherings each year on the lake. Riversweep, organized by the Catawba Riverkeeper Foundation and Lake Wylie Marine Commission, is a community clean-up where volunteers comb shorelines and haul in thousands of tons of trash and debris. This year’s event will be held Oct. 5 A week earlier is the 11th annual concert benefit for Lake Wylie Children’s Charity. The group sponsors an area child facing cancer each year and throws a fall bash to raise money to help the family pay for medical expenses and more. Last year’s event was so successful, the recipients were able to purchase a house. This year’s concert will be held Sept. 29 near Buster Boyd Access Area. Cole said this group is talking about hosting another large event in the spring. “It’s some exciting times, some really cool events coming up,” he said.

Real estate investors are planning an 810-home, 670-acre development in Gaston County on a largely undeveloped peninsula just outside Belmont.

The project, which would cover five miles of Lake Wylie shoreline, was first shown to Belmont’s planning and zoning board last week. The land is the former home and cattle farm of Daniel Stowe and is next to the 380-acre Daniel Stowe Botanical Garden.

It’s the second planned development for the tract of land at South New Hope Road and Lower Armstrong Road in the last five years: A previous, 1,900-home, mixed-use development fell through during the recession.

“It is certainly the biggest since the recession” in Belmont, said assistant city manager Adrian Miller.

The land for the proposed development must be annexed by the city of Belmont and needs utility service.

The annexation process is expected to start next month at the Sept. 3 Belmont City Council meeting, and could conclude by November, Miller said.

The earliest the project could win rezoning approval is the Nov. 4 council meeting.

New York-based Northwood Investors, a $3 billion real estate investment and management firm, is behind the development.

The company also bought The Vue Charlotte, an uptown building that was formerly condominiums, in foreclosure last year. The company converted The Vue to apartments.

“This is an opportunity to invest in a parcel of land that simply cannot be replicated,” said Steven Hinshaw, a Charlotte-based development partner affiliated with the project, in a statement.

“We look forward to creating a community that is friendly to the environment, offering generous open space, access to the lake and active recreation areas.”

Sediment pollution has been an issue on Lake Wylie. Some homeowners say streams of runoff flowing from construction sites are to blame.

Miller said that the development will include required environmental protections to preserve water quality, such as buffer space along the waterfront.

He said the development could also use low-impact designs requiring less grading and less clearing, and includes open spaces and stormwater retention features.

Kara Newport, the Daniel Stowe Botanical Garden’s executive director, said the proposed development is “in line with the vision” of the garden, and will be “low impact.”