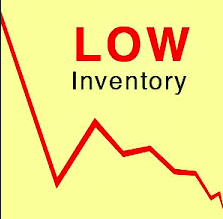 A sellers market continues to prevail in Lake Wylie as well as in the entire Carolina MLS area.  June’s market update from the Charlotte Regional Realtor Association indicates a massive drop in the month’s supply of inventory, down 31.8 percent  from the 2015 June numbers. There was also an 8 percent  increase in the average sales price of homes, and an increase in sales price is a typical result of low inventory. Furthermore, the median sales price of homes has been steadily on the rise since 2012 and the trend is continuing.

With strong sales as well as a steady drop in inventory in the region, the average sales price continues to rise and sellers are seeming to have the upper hand.

June’s regional stats are fairly indicative of national real estate numbers. Inventory is low in many major markets across the country and housing prices are climbing.

Stay tuned for next month’s market update and a look at the region’s trends.