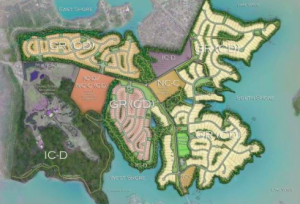 McLean is one of the most talked about and highly anticipated residential developments in Belmont, North Carolina on Lake Wylie. The 670-acre development covers five miles of shoreline along the border between North Carolina and South Carolina.  The community will include 800 homes, as well as a marina with a waterfront restaurant, a public park, 10 new miles of trails that will connect to already existing trails, and a pool clubhouse in each of the three primary neighborhoods of the subdivision.

The current breaking news on the development regards the 37 of the 800 new homes that dip into York County in South Carolina. While York County has already approved the plans for this part of the neighborhood, The company behind the new development project has asked for an extension, as currently construction is only allowed to continue through August 10 of this year. County planning staff is recommending a one year extension to guarantee completion within a preapproved time frame. Because these York County homes will have no access from York County, the roads, water and sewer infrastructure will be served by Belmont, as this is where the majority of the development sits.

The three primary neighborhoods of the development are South Shore, the Conservancy, and Overlake. Construction on South Shore homes has already begun and homes in the neighborhood will range from approximately $400,000 to over $1 million. Homes in the Conservancy are slated to be ready this spring and start at approximately $240,000. Home construction in Overlake is not slated to begin until later this year,  and the marina will be built as part of a much later phase. The entire McLean project, which includes not only the homes but also the marina, restaurant, park, trails and more is not expected to be completed in its entirety for approximately 8 to 10 years.

For more details on the McLean project in Lake Wylie, be sure to read the full article at CharlotteObserver.com.

McLean is a new beautifully master-planned waterfront community on Lake Wylie in the town of Belmont occupying 670 acres along five miles of stunning shoreline in an extraordinary location, right next to the Daniel Stowe Botanical Garden and the Carolina Thread Trail. Furthermore, it is conveniently located near downtown Belmont’s charming shopping and dining scene. This remarkable new community will allow residents easy access to all of the activities that Lake Wylie has to offer, including boating and fishing, as well as the opportunity to take advantage of the location’s pure lakefront beauty.

The newest development within this community is with The Conservancy, a small village subdivision that will feature 50 cottage-style ranch houses built by M/I Homes. M/I Homes will offer six different home designs, and pre-sales have already begun. The home designs for The Conservancy offer numerous optional features and add-ons, such as a bonus room, an upstairs living room, or outdoor living areas. With the purchase of every M/I home, homeowners can take advantage of the included lawn maintenance, Energy Star certification, and a 15-year transferable structural warranty. Plus, The Conservancy has its own pool, clubhouse and bocce ball court for residents to enjoy, and these amenities are scheduled to open in 2017.

M/I Homes is one of the country’s premier builders of high-quality single-family homes focused on “uncompromising quality, innovative design and enduring value in the best, most desirable locations possible.” For more details on the company or for more information on the community of McLean, be sure to read the full article at PRnewswire.com.