The Landing is a community built directly on the shores of Lake Wylie. The neighborhood is located conveniently to Charlotte, NC while residents still get to enjoy the benefits of South Carolina’s lower taxes. The Landing is also part of Clover School District, one of the best districts in the state.

Residents of the landing get to enjoy all the amenities of Lake Wylie. The neighborhood even has 25 boat slips for its residents. Other amenities include a neighborhood park, clubhouse, and pool. The Landing even has its own competitive swim team. The Landing also has around 2 miles of paved walking trails along with sidewalks along all streets so residents can enjoy walking, running, or biking. Most of the lots in The Landing are around half an acre and the neighborhood has placed a large emphasis on maintaining as much of the natural landscape around the lake as possible.

There are currently 10 homes on the market which represents 6.3 months of inventory. This makes The Landing a balanced market between buyers and sellers. This is comparable with the Lake Wylie area in general which also has a balanced market while York County has more of a seller’s market

In the last year, the average sale price of homes at The Landing has slightly increased as well as the average price per square foot. Homes are listed from $360,000 to almost $900,000 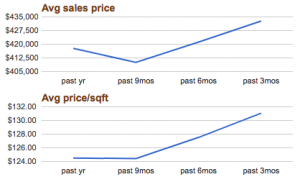 The Landing is a wonderful family neighborhood where residents can enjoy being close to city life while still enjoying the more peaceful setting of Lake Wylie. This neighborhood is definitely worth checking out!