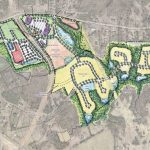 The first reading of a new proposal for a 115 acre mixed use project was presented at the Fort Mill Town Council meeting in the middle of June. The project, if approved, would bring homes, townhomes, senior living, and commercial space including a grocery store.

The project is located on Fort Mill Parkway at North Doby’s Bridge and Williams Roads near Doby Bridge Park. The plan for the project calls for up to 220 independent and assisted-living memory care units. There would be a separate area for up to 150 homes and 90 homes age restricted for senior living. Up to 240,000 square feet of commercial space would support the needs of residents in and outside of the project. The grocery store would be 50,000 square feet of the space and would be located on the North Dobys Bridge side of Fort Mill Parkway. Within the remaining square footage would be offices and retail. The tentative tenants for these spaces includes medical offices, fast-food, a bank, and general offices.

Crossroads Development Partners are in charge of the project and they have submitted the concept plan for approval. The first look at the project happened at the most recent town council meeting. Based on the proposal, the Town Council can approve or ask for amendments to the plan. The planning commission can make a recommendation for or against the project with the Town Council having a final vote.

Part of the plan is a traffic impact analysis as a large project of this sort can make a big difference in an area. The developer is responsible for traffic improvements including turn lanes, alteration to traffic signals, and widening for turn in lanes. They will also be responsible for new cul-de-sac streets in the residential portion of the project..

The plan calls for a 10-year build out with half of the project happening in each 5 year segment. Town Council will have the ability to amend the plan in ways that would help the community as the project grows. The project will need to have rezoning and annexation which makes it a little bit complicated. This calls for amending the town comprehensive plan as well.

The public will have a chance to have input. The most pressing issue appears to be congested roads in the area and how such a large project will impact them. The first public hearing is tentatively set for July 12th with another hearing to follow.

For more information on the Lake Wylie area, especially buying and selling homes, neighborhood information, and much more, call us at 803-831-8588. You can view current listings and create custom searches on our website here.

To read more about this new development, see the article in the Fort Mill Herald.